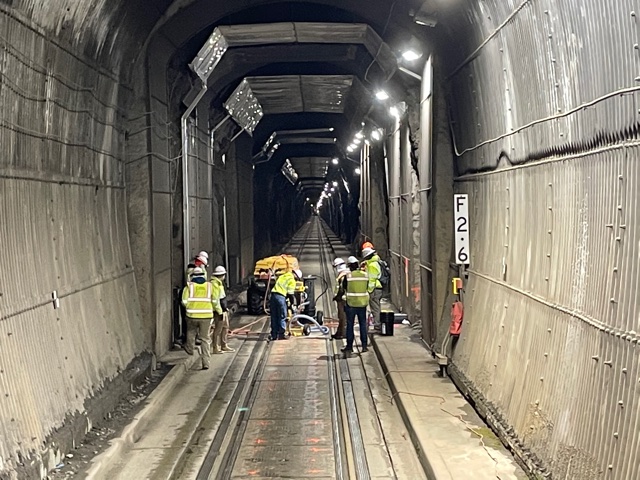 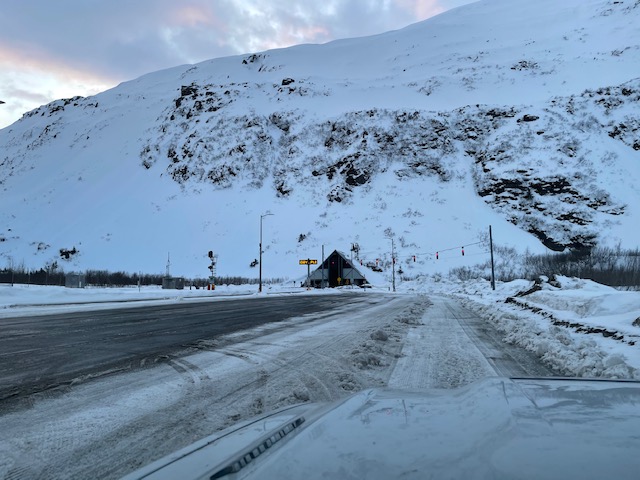 The 8’x8’x14” precast panels were installed in 1998 with concrete poured adjacent to them to create an 11.5’ combination rail/one lane road.

Due to excessive water intrusion, the fine sand layer directly under the panels was continually saturated with water which caused “pumping” during train operations. This action displaced the liquefied sand/water mix which caused sand to be expelled up through the expansion joints, as well as travel longitudinally causing in turn, “valleys” which were lower than design grade and “hills” which were higher than the design grade into the track/roadway grade profile.

Numerous attempts were made to repair problem areas by lifting the rails with a gantry crane and pumping a sand/water slurry under the low areas. This failed almost immediately. Then a sand/cement slurry was attempted which failed as well. Next, a cement grout was tried which did not cure properly as it was able to mix freely with the existing ground water resulting in a poor result. Following this a more modern fast reacting cement grout was tried which worked better, however the thin layers tended to shatter and turn to dust during train operations and once again the rail-bed continued to move.

Polyseal was contracted to repair the problem by injecting polyurethane foam to lift and bed the rail/road bed. HMI was the only foam that could meet the specifications. Polyseal used HMI 402 fast formulated at a 5.5 lb. density (128 psi comp) to manipulate and bed the panels. By pre-drilling 6 holes per panel with an EZ Drill pneumatic drill machine the lifting and bedding was done rapidly and under complete control. Polyseal followed a sequence as follows: First each problem sequence was surveyed and a grade profile designed. This created essentially an approach grade, a travel grade and finally a departure grade. Great care had to be taken to not raise the high points of the existing grade

any higher as the tunnel/train clearance parameters were very close.

This method focused on reducing track amplitude on both the longitudinal axis as well as the lateral axis. Next the foam was injected while monitoring elevation devices on each rail top. Finally, the injection holes were filled with Dayton 1107 grout. 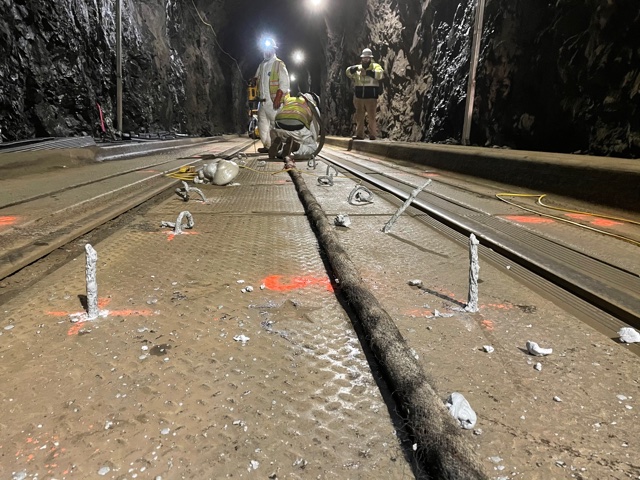 Time savings over alternative repairs: The previous method used to level the panels was with a rail mounted gantry crane and a grout pump. The most that they could complete in a single shift was 8-10 panels. With the polyurethane method we averaged over 40 panels per shift with no heavy equipment.