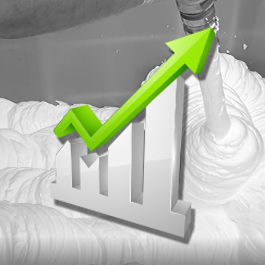 BILL – A YEAR LATER – GRAPPLING WITH THE VIRUS
Paul DelFino

PREFACE: This Blog is a continuation of “THE LIFE Of BILL” series. Among the most popular blogs in HMI’ history, Bill was first introduced in the February 2019 HMI blog publication. Readers are encouraged to read the initial blog and also the story of; “HOW BILL LEVERED BAD WEATHER TO DOUBLE HIS BUSINESS” in April 2019 to gain history and context about the character and his progression in the polyurethane lifting business. First envisioned and created as a method to articulate an average day of someone in the trade, Bill has evolved to an almost real relatable friend to many customers who reference him with a smile when speaking with HMI personnel.

WORLD OF CONCRETE 2020
Bill walked the World of Concrete in Las Vegas with his head spinning. All he kept saying was – “I had no idea!” The trade show was overwhelming to Bill. His lack of experience in the trade never allowed him to be exposed to so many: perspectives and dimensions of the industry, types of equipment, volume of vendors and ways to make money. For sanity and to secure an at home feeling he and his son kept returning to the HMI booth daily. Beyond seeking familiar faces, Bill and his son were enamored by HMI’s demonstration of the introduction of FillFoam. Even with only two years in the business Bill had run into and passed on a number of void filling jobs. When he learned he would be able to offer the new service with only a $15,000 investment for one of his trailers, he signed up for the special HMI training program in May 2020.
When Bill left Las Vegas stories about the coronavirus in the Orient where just making the daily news. Although there was talk of cancellation of things like the Olympics and suggested limited travel to the Far East, it was a problem far far away and a modest thought when compared to the opportunities he saw as spring approached. He and his son planned on hitting the market hard to start 2020.

TODAY
What was someone else’s far far away problem, is now Bill’s number one and perpetual thought. The coronavirus has changed Bill’s life and his perspective for the near term in only 4 weeks. What was to be an easy record year now has Bill concerned for his entire family’s health and financial wellbeing in 2020.
Not being one to wallow in negative thought or to be paralyzed by adverse conditions, Bill orchestrated a meeting with his son to insure they were prepared to do the best they could in 2020 despite the virus threat.

BILL CALLED HMI – Bill feared his supply line would be cut off. He was delighted to learn HMI was producing and shipping foam and planned to continue. He gained confidence as he learned about HMI’s staffing plan to insure the plant remained open for its customers. He was assured Foamjection Leads would still be coming his way.

THE TEAM CALLED SCHEDULED CUSTOMERS – Bill had just previously released an email blast to all 2019 prospect with bids that had not been accepted last year. He had scheduled work from this mailing and was delighted to learn all of his customers wanted him to complete the work the day weather allowed. He learned customers were looking forward to getting something done and viewed outside work on their property as no threat. Many were surprised he planned to be there. Bill took advantage of the call and offered everyone a discount for referring a neighbor in advance of his visit. His backlog grew.
Although Bill had embraced the HMI digital marketing model, which heavily levers email, Bill and his son are now, getting personal, and calling every prospect until the world returns to normalcy. People are home and enjoying the contact.

BILL AND HIS SON ARE CALLING EVERY COMMERCIAL INTERMEDIARY AND REFERRAL SOURCE – With so many business and local government personnel working from home, Bill have learned that they are easier to reach and they are returning calls. The effort is getting results since now, with time on their hands at home, they are prepared to invest their time to introduce Bill and his family service to more and more businesses and other officials. Local officials want to get things done and Bill gained some new work as budgets are being shifted to things that can be accomplished.

MAKING A MARKET FOR FILLFOAM – Bill went into his CRM and called the individuals who had asked him about void filling in the past. One was a town official who had a pipe to fill and the other was a local farmer who had an abandoned well. It turns out the well job was never done and Bill is now on tap to provide an estimate. Although he missed out on the pipe project in 2019 the town official was enamored as Bill walked him thru the FILLRITE TECHNOLOGIES Website. The town is preparing a list of void fill projects for Bill and promises to invite engineers and other surrounding town project managers to view the project when Bill does the work.
The outreach efforts gained more work. But more importantly is that it brought Bill and his son forward from anxiety to cautious optimism. He understands the current environment will have challenges for the remaining months of 2020. However, work is being scheduled and done.
Ironically Bill booked his trip yesterday to visit HMI in May to experience the special FILLFOAM seminar. His new optimism has allowed him to believe he will be making the trip. As he told his son – “this will not last forever!”

AUTHORS NOTE – The characters and events in this blog are fictitious. Any similarity to real persons is NO coincidence and absolutely intentional by the author. Also of note – although not explicitly stated, like all HMI customers, Bill is a great guy!